Alan Abernathy (portrayed by Gregory Smith) is the fifteen year old protagonist of Small Soldiers. He was been expelled from two schools for playing pranks, though the rumors around his new school saying "ten".

His parents moved to Chicago, Illinois, hoping to start over. Despite his mistakes, he wants to remedy helping his father in the toy shop. He befriends the Gorgonites and becomes their primary protector. He also begins a romantic relationship with Christy Fimple, the girl next-door.

Alan is first seen on his bicycle going to his father's toy store and operate in the store. A few minutes later, Joe, a Globotech Heartland Playsystems truck driver, comes by and delivers Alan's father's order. Moments later, they try out the Gorgonites and the Commando Elite to see what they are. Having an idea to make some money for the store, Alan asks Joe to front him a whole set of each of them to sell, which he says he'd pay him back for them after they've been sold. Joe reluctantly agrees to and in hopes of that Alan can handle it.

Alan, having lucky thoughts in that Chip Hazard is practically sold, Christy and Timmy seen it and promising to get it the next day, puts Chip Hazard in his box and on the shelf, having forgotten he is still activated. Alan later notices his dad's plane ticket on the counter, and closes the store for the day to go back home and bring it to home. Little did he know, Archer got out of his box and into his backpack before making his way home.

Later, at the store in the dead of night, Chip Hazard, still being activated, activates the rest of the Commando Elite and search out and destroy the Gorgonites wrecking the entire store in the process. The next day, Alan comes to the store and sees the mess and that the toys are gone and panics. Christy, who comes to the store to get Chip Hazard and Archer, sees the store is a mess and offers Alan to help clean up the store. Alan and Christy try fixing the boat, only to see his dad found out how it got messed up and sends Alan home so he can fix it.

Back at home, he tries to get in touch with the Heartland Playsystems about a problem with the Commando Elite and what had been happening lately. He left a message on a voicemail recording leaving his name and number. Later, Archer is captured by the Commando Elite, and he rescues him having his hand cut in the process. His dad comes down to see what the commotion and he tries to tell him that the toys are alive and running and only for his dad to be found at a loss. Archer then tells him the Gorgonites are hiding.

The next day, they find them in the dumpster. He looks after them throughout the day while trying to figure out what next. The Commando Elite secure Christy as a hostage in exchange for the Gorgonites. Not wanting to give them up, he deploys a decoy target via tape recording player with their voices and successfully rescues Christy and evade the Commando Elite (Chip Hazard having survived, however).

Later at the Abernathy's house, he tells them about the situation with the toys being alive and all, when all the sudden Irwin Wayfair and Larry Benson show up to ensure Alan about the toys being "harmless" or even defective in this case.

Afterward, an attack ensues at the Abernathy's place on them, Irwin, Larry, the Fimples, and the Gorgonites by the Commando Elite. After an intense battle, Alan notices the power poll with the huge transformers that can explode to put out a wipe of EMP (electromagnetic pulse). He goes to put something metal between it, only to be intercepted by Chip Hazard, who then has his battle with Archer. Alan bravely grabs Chip Hazard and puts him between the transformers, thus electrocuting Chip Hazard in the process, for the circuit to be completed for the EMP blast.

The next day, he is seen cleaning up around the neighborhood. He apologizes to Joe for the thing that had happened when he bought the toys from him and the incident with them. He later bids Christy farewell, having given her a kiss, thus starting a relationship with her. Afterward, he finds the Gorgonites, having survived the EMP, due to the satellite dish shielding them. He later gives them the boat from the toy store and bids them farewell sailing them off in finding Gorgon. 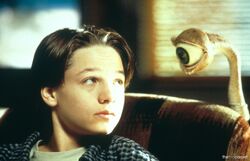 Add a photo to this gallery
Retrieved from "https://smallsoldiers.fandom.com/wiki/Alan_Abernathy?oldid=8748"
Community content is available under CC-BY-SA unless otherwise noted.