"Greetings I am Archer, emissary of the Gorgonites"
―Archer

Archer is the main toy protagonist in the film Small Soldiers. He is the leader of the Gorgonites. He has a very noble and kindhearted personality in which he tries to ally with anyone he finds that can help him and the Gorgonites fend off the Commando Elite.

His mortal enemy is Chip Hazard. Finding the Gorgonites' homeland, Gorgon, is his primary objective. His appearance resembles a humanoid feline.

Archer and the rest of the Gorgonites were created by Irwin Wayfair, a toy designer from a company called Heartland Playsystems which was bought out by Global Tech. Industries. In his box, Archer came with his trademark crossbow, three arrows, a quiver and a sword and could be activated by the words "Halt! Who goes there?"

Because Archer is a Gorgonite, he was ultimately programmed to hide and lose to the Commando Elite. This made Archer unhelpful in some cases. But still Archer tried to assist Alan Abernathy.

The first situation in which Archer helped was when the Commando Elite had taken Christy hostage and demanded that Alan surrender the Gorgonites to them. Alan set up a decoy for the Commando Elite and from there Archer was tied to a rocket. When the rocket flew upward, Archer jumped off and parachuted into the Fimple’s house. Archer unlocked the back door so Alan could slip in to rescue Christy.

Another event in which Archer helped was when Alan was attacked by Chip Hazard while setting up the EMP with the telephone pole. Archer fired his crossbow upward and over the arm of the pole. From there, Insaniac helicoptered around so Archer could be brought up to the pole. When Archer attempted to attack Chip, he was kicked off the pole and fell to the ground.

"Even if you can't see something, it doesn't mean it isn't there."
―Archer saying farewell to Alan.

After the Gorgonite allies defeated the Commando Elite, Alan found Archer and the rest of the heroic Gorgonites hiding under the Fimples' huge satellite transmission disk. A couple of days later Alan gave the heroic Gorgonites a wooden boat in which to set sail on a river in search for their home world Gorgon. 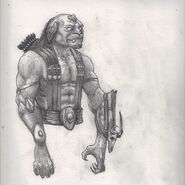 Archer with an alternate crossbow
Add a photo to this gallery 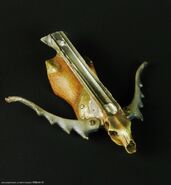 Add a photo to this gallery

Retrieved from "https://smallsoldiers.fandom.com/wiki/Archer?oldid=9063"
Community content is available under CC-BY-SA unless otherwise noted.