Sporting the latest in destructive Commando technology, the XJ-57 Bipedal Walking Weapons Platform (also known as the Bipod) is a Commando Elite weapon used against the Gorgonites. It was briefly featured in the PlayStation 1 adaptation of the film.

The Bipod is (as its name implies) a bipedal robot armed with a concealed side-mounted gun. The gun ejects out from the Bipod's triangular side panels when attacking targets. It has two optical lenses on its nose which are painted over with a sharp-toothed mouth.

In Player 2 Mode, Bipods can be summoned by Chip Hazard in the levels:

A Bipod viewed from the front.

A Bipod with its side-mounted gun primed to fire.

Bipods as they appear in the game's artwork

A Bipod exploding after being destroyed by a Rebound arrow. 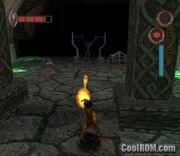 A Bipod attempting to repel Archer from freeing a Gorgonite.

A Bipod attempting to shoot Archer off of a ledge.

A Bipod in the Dimensional Temple
Add a photo to this gallery
Retrieved from "https://smallsoldiers.fandom.com/wiki/Bipod?oldid=8753"
Community content is available under CC-BY-SA unless otherwise noted.