Brad (portrayed by Jonathan David Bouck) is Christy Fimple's boyfriend for the first half of Small Soldiers.

Brad is a member of the JV Basketball team at his school, and is first seen after Christy helps Alan clean up his father's toy store. He picks her up and they ride off on a red motorcycle.

Later in the film, he drops Christy off at her house at night. Staying outside thinking of an excuse to come inside, he hears Christy scream and rushes to her rescue. He opens the door to find Christy's deformed Gwendy Doll collection gagging and tying her up. A few throw themselves at Brad, but after he managed to break a few, Chip Hazard and Butch Meathook set his pants on fire, prompting him to run away.

Since he fled and didn't come back for Christy, she ended up leaving him for Alan at the end of the film. 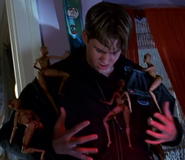 Brad enters on his motorcycle
Add a photo to this gallery
Retrieved from "https://smallsoldiers.fandom.com/wiki/Brad?oldid=8648"
Community content is available under CC-BY-SA unless otherwise noted.