Brick Bazooka was created by Larry Benson, a toy designer for Heartland Playsystems.

Brick was sent on a solo mission to assassinate Archer, the leader of the Gorgonites. Bazooka was launched via an improvised slingshot, intercepting a bicycle ridden by Alan Abernathy. He climbed his way up the side of the bike to Alan's backpack to execute his orders. During the ride, Bazooka lost his grip and fell off the bike, desperately trying to keep his balance on the bike's rotating chain belt until finally, his foot was caught in the chains, pulling him into the rotating wheel spokes, resulting in Bazooka instantly breaking apart. He landed in scattered pieces on the street pavement. Brick crawled to his "waist" piece containing his belt's radio receiver to answer an incoming message from Major Chip Hazard. He painfully reported his mission failure and requested medical help for his "injuries". The Commandos reassembled him, allowing Bazooka to return to active duty and continue the ongoing mission.

Brick and all the other Commando Elite (except Chip Hazard) fell into a pond after a chase mission went wrong, destroying them.

Chip later activated more versions of him in a final battle, but they failed when their X-1000 chips were destroyed. 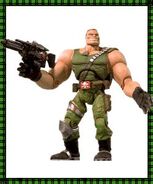 The toy based on Brick Bazooka as he appears in the film.
Community content is available under CC-BY-SA unless otherwise noted.