She is first seen when she walks into Alan's family toy store, looking for a toy for birthday present for her brother Timmy. Christy initially was in a relationship with Brad.

When the Commando Elite learn of Alan's interest in Christy, they decide to take her hostage, immobilizing the Fimple household to force Alan into surrendering the Gorgonites. Alan and Archer sneak into the Fimple house to save Christy, but runs into her Gwendy dolls, whom the Commando Elite engineered as auxiliary troops. Archer cuts Christy loose from her bonds and together they destroy the Gwendys before escaping.

Near the end of the film, she makes it clear that she wants to be in a relationship with Alan instead of Brad.

Christy pulled to the ground by Gwendy Dolls 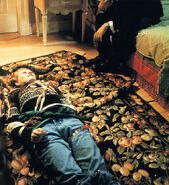 Behind the scenes of the Gwendy Dolls capture. 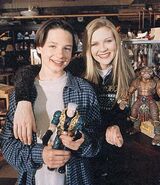 Promotional shot of Gregory Smith and Kirsten Dunst in character as Alan and Christy respectively.
Add a photo to this gallery
Retrieved from "https://smallsoldiers.fandom.com/wiki/Christy_Fimple?oldid=8934"
Community content is available under CC-BY-SA unless otherwise noted.