"I must reclaim this fortress." - The opening speech from Archer when starting the level

Floating Fortress is the second level in the PS1 game Small Soldiers. It is not seen and referenced in the film. It is a level on the one player mode of the game only. Archer must destroy the Star Fighters using the Harpoon and find all three of the colored Gorgonite Chanter tokens in order to obtain the keys to unlock the colored doors to open the portal at the end to complete the level, namely green, red and yellow.

When starting the level, the mission screen shows the following missions: 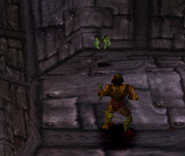 Second Hidden Spirit
Add a photo to this gallery

Retrieved from "https://smallsoldiers.fandom.com/wiki/Floating_Fortress?oldid=8547"
Community content is available under CC-BY-SA unless otherwise noted.