Whilst making the film a number of Gorgonites were designed who didn't make the final cut of the film. They range from different designs to different colors and even how they would walk from the final result

Before settling on the final color scheme for Slamfist the designers gave a few different designs a try.

Early Flatchoo color design to the right on a crew member shirt.

Early Gorgonite sketch of the plant and ogre Gorgonites and early Troglokhan and Punch It designs. 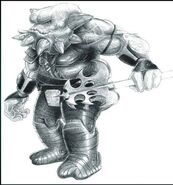 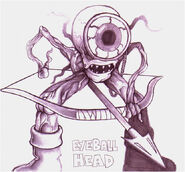 A early concept of how Scratch It would move. 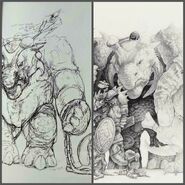 early concept art for scratch it 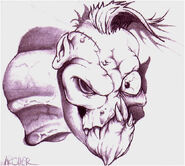 very early idea of ocula to final
Add a photo to this gallery
Retrieved from "https://smallsoldiers.fandom.com/wiki/Gorgonite_Concepts?oldid=9144"
Community content is available under CC-BY-SA unless otherwise noted.