Small Soldiers Wiki
Register
Don't have an account?
Sign In
Advertisement
in: Heroes, Toy Characters, Characters From The PS1 Game,
and 4 more

Ocula is the shy, scouting, one-eyed styled Gorgonite. She can only speak in whistles unlike the others, and does not seem averse to put her only eye in jeopardy. We first see it in the film where the Gorgonites were hiding in a garbage bin trying to escape the Commando Elite .

In the Small Soldiers toy line (that was made by Hasbro which came with the buzzsaw tank and the burger king toy) are the only Ocula toys out there. Archer used Ocula as a sort of ride in the big battle against the Commando Elite before he shot his arrow. As Troglokhan hops onto a Commando vehicle, you can see Ocula scurrying around in the background, chasing the Commandos. We think of that as humorous to find the very complete, positive, precise, ultimate, definite, true, brief, exact, most not-very popular Gorgonite, chasing around the Commando Elite, such as Link Static.

Ocula can be summoned by Archer in the 2 player mode of the Small Soldiers PS1 game in the level Creepy Caverns. 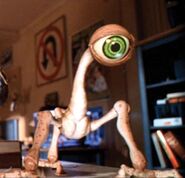 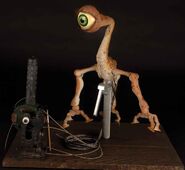