Slamfist is hunchback-like enforcer of the Gorgonites. With a boulder strapped to his left hand Slamfist may look pretty tough, but he is very kindhearted and gentle (just like the rest of the Gorgonites) and was programmed like the other others to hide and lose. He also has a very quiet and good-nature personality in which he tries to assist his very best brother Archer and his fellow Gorgonites in any way to help fend off the Commando Elite. Protecting Archer is his very own complete precise main primary objective.

Creator: Slamfist was created by Irwin Wayfair who was toy creator of company called Heartland Playsystems and then bought out from Global Tech. Industries. His partner's name was Larry Benson (the creator of the Commandos).

Since Slamfist is the strong Gorgonite enforcer, he was not supposed to really do anything for the Gorgonites except for protecting his very best brother Archer. There was really only one time Slamfist really helped out and that was when the Gorgonites finally tried to help the Fimple and Abernathy family fight back against the Commandos when they launched a full scale attack in their neighbourhood. Slamfist assisted by jumping on and knocking out two of two with his boulder fist.

After the huge battle of the Gorgonite allies defeating the Commandos, Slamfist and the rest of the Gorgonites were found hiding under a huge satellite transmission disk that had shielded them from an Electromagnetic pulse that had wiped out their enemies for good. Then a couple of days later Alan gave the Gorgonites a wooden boat in which they set sail on a river to go in search for their home world Gorgon. 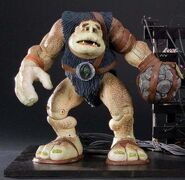