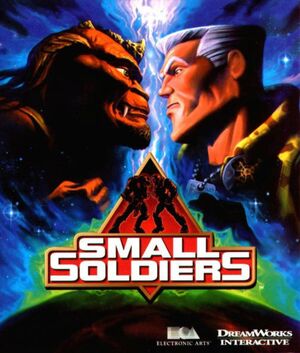 Small Soldiers is a 1998 action video game, based on the film of the same name.

The Commando Elite are waging war on the Gorgonites' homeworld Gorgon. Gorgonite leader Archer has sworn to protect his homeworld and travel to their war-torn homeworld, defeat Chip Hazard and end the war once and for all.

The game has both a one and two player mode. One player involves controlling the main character Archer on a mission to save Gorgon from destruction and defeat Chip Hazard and the Commando Elite on their war-torn homeworld.

The player 2 mode involves a split screen showing both Archer and Chip Hazard allowing the characters to either fight in frag mode, using various weaponry to defeat each other, and whoever has five victories first wins. The other mode is flag mode, where each player starts with a flag on their base, and one in the level. When a player has retrieved all three flags on their base, they win. A crown indicator will appear on a player when in possession of a flag, and is also shown in their inventory. When a player carrying a flag dies, they drop their flag and return to their base, allowing the other player to retrieve the dropped flag.

An added bonus to this game is the soundtrack. The creators designed the disk to both run the game, in the Sony PlayStation, and the soundtrack. Some of the tracks are corrupted due to the lack of clean-up, but the music from most of the levels are also available.

Note that the level appearance differ to the ones in the player 1 mode.

In the player 1 mode, Archer's life meter is made of four rectangular red bars in the top left corner of the screen. This meter is filled up by wind, a pickup found through the levels. When the meter runs out upon death, a life is lost, in which Archer starts with four. Collecting spirit pickups will increase the lives Archer has. At the right are two column which show two different types of weapon. The left represents the ammo in Archer's crossbow. The red one is the weakest ammo available and is unlimited. Archer can find pickups triangular in shape which offer different powers and deal more damage. There are blue, green and a more stronger red gun. The blue and green ones have semi-aiming abilities to aim at the enemy. The more powerful red gun is the most effective, as it will only take two or three hits to defeat a basic enemy.

The other meter is for drops. Archer can collect up to nine of one type of power up. He can hold nine of the Gorgonite spawn so if one dies another can take its place, but only one of the Gorgonite is allowed to spawn at a time. Traps are also found and can be dropped on the floor in a circle shape, and each pickup gives three traps. They can be shot or stood on, causing damage. They also run out after 30 seconds or so.

Another drop is the bomb. It is red and can be thrown, exploding after about 2 seconds. A rare drop is the earth power up. It allows the player to cause every enemy around him to be immediately destroyed.

See above for level passwords and see the level's article for walk through. 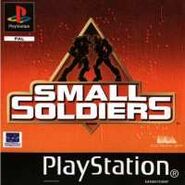 Add a photo to this gallery

Retrieved from "https://smallsoldiers.fandom.com/wiki/Small_Soldiers_(PS1)?oldid=9060"
Community content is available under CC-BY-SA unless otherwise noted.