Troglokhan is the navigator. He was destroyed by the Commando Elite, but was later reassembled by the Gorgonites with a his remaining pieces and Alan's Dad's old battered radio. 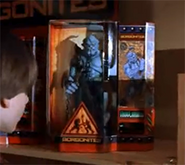 Before: Before being torn apart he looked like a humanoid creature with blue skin, he wore strapping with brown Spikes on them, and had various shackles around his left arm and neck with chains hanging off of them. He wore a loincloth around his waist and leather boots, along with wrapping on his right thigh. His main weapons were a dagger and club, with his main way to defend himself being a shield with a red skull on it.

After: After being torn apart the only thing he has left after being rebuilt is his dagger in his hand, but now in place of his foot. And club now mounted on the side of his body, swingable of course so he can still attack. His loincloth in place still and one of his boots intact. The shield still attached to his arm. The things that replaced his old parts are a radio and the radio gears can swing his club and a stitch on other half of another toys face. Possibly to hide wires. A yellow wire replacing his left eye he has been stitch back together and the notable thing about him being rebuilt is that his dagger hand has been switched with his bootless foot, and his foot now in place of his hand. Meaning his left side has the bat and the booted foot. We see troglakhan's left arm on the floor amid a large mess of boxes before he is shown to have died.